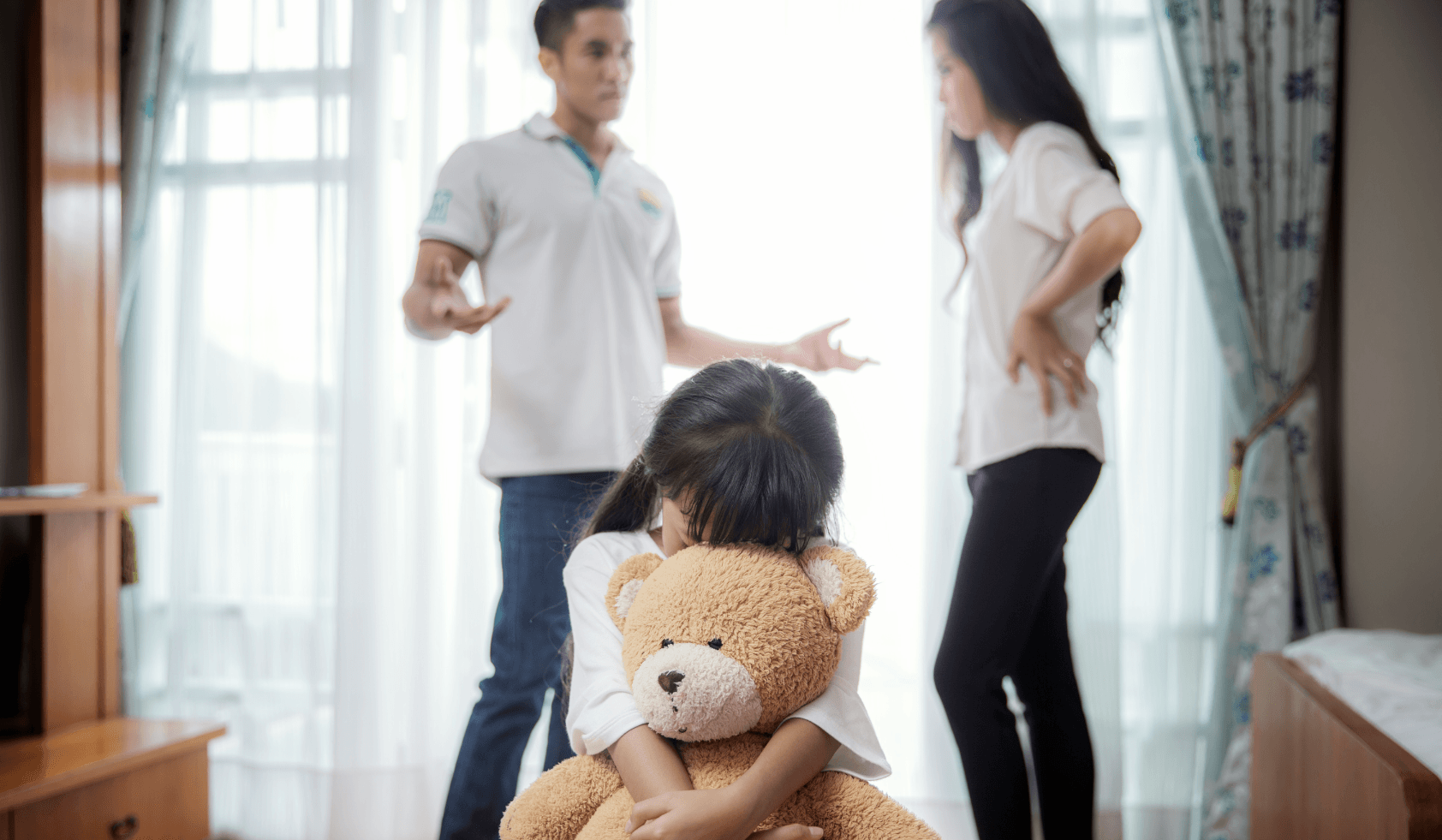 A Summary of Current Research on Concepts, Issues, Interventions, and Best Practices

The concept of parental alienation has been the subject of much controversy in the mental health and legal fields, and related concepts, such as gatekeeping, are often poorly understood. Johnston and Sullivan (2020) noted that controversy over parental alienation has lasted over three decades, and the concept has managed to remain a “complaint du jour” in high-conflict family court disputes. Simplistic ideas about parental alienation are currently promoted on the internet and in the media and unfortunately sometimes referenced in court cases (Fidler and Bala, 2020). Deutsch, Drozd, and Ajoku (2020) noted that cases involving children who resist contact with a parent are challenging for courts, clinicians, and attorneys and typically require significant resources.

“‘Parental Alienation’ is the process, and the result, of psychological manipulation of a child into showing unwarranted fear, disrespect or hostility toward a parent and/or other family members” (p. 270).

The authors maintained that this definition of parental alienation (PA) is inadequate. PA can refer to three different aspects of a child-parent relationship problem: the alienating behavior of the parent, the characteristics of an alienated child, and a general theory of how alienation occurs (Johnston & Sullivan, 2020). The researchers also describe the importance of focusing on parental alienating behaviors, or PABs, in order to clearly operationalize the problem. PAB is broadly defined as:

…an ongoing pattern of observable negative attitudes, beliefs and behaviors of one parent (or agent) that denigrate, demean, vilify, malign, ridicule, or dismiss the child’s other parent (p. 283).

There are many examples of PABs, including communicating false beliefs or stories about the parent, withholding positive information about the parent, or not assisting in the development or maintenance of a child’s relationship with the parent. PABs also include portraying the other parent as dangerous or exaggerating their negative qualities or behaviors.

In a 2013 bench book (an updated compendium of guidance for judges’ immediate reference about court procedure), the related concept of parental gatekeeping was defined as “how parents’ attitudes and actions affect the involvement and quality of the relationship between the other parent and child” (Austin, Fieldstone, & Pruett, 2013, p. 2-3). One way of understanding gatekeeping is to consider whether a parent is “either opening the gate to support the other parent’s relationship with the child or closing the gate to restrict the other parent’s relationship with the child” (Saini, Drozd, & Olesen, 2017, p. 261). The bench book notes that gatekeeping can be productive in intact families, defining parental roles and responsibilities, but after separation, those roles must be re-negotiated, which is challenging. Austin (2018) reported that gatekeeping has become increasingly useful in family law due to its research base, although he pointed out that gatekeeping overlaps with other concepts, such as co-parenting and parental alienation. Saini and colleagues (2017) stated that gatekeeping “is a useful framework for assessing parental behaviors and attitudes that can facilitate, protect, or restrict the involvement of the other parent with the child” (p. 260). Although the concept was originally developed to describe maternal behaviors that either facilitated or restricted the involvement of fathers, it has become more gender-neutral and is applied to either or both parents.

As the concept of gatekeeping has evolved, researchers have expanded the definition to describe it as a continuum that varies in degree (low, medium, and high), in quality (how facilitative or restrictive a parent is), and across specific behavioral domains (such as information sharing, communication, or appreciation of the other parent; Austin, 2018). The quality of gatekeeping behavior has been a subject of much research and has been divided into two primary types or patterns: facilitative gatekeeping (FG) or restrictive gatekeeping (RG). The 2013 bench book provided a table to illustrate the range of behaviors and attitudes associated with each end of the continuum (Austin, Fieldstone, & Pruett, 2013, p. 4):

According to these authors, FG involves a parent supporting involvement and a meaningful relationship with the other parent, whereas RG involves a parent interfering with or not supporting such involvement. Facilitating behaviors are considered to be “proactive, inclusive, and demonstrate for the child that the parent values the other parent’s contributions,” while restricting behaviors would be expected to negatively impact the quality of a child’s relationship with the other parent (p. 5). FG is often included in state lists of factors that promote the best interests of children.

In addition to the broad continuum involving FG and RG, researchers have described protective gatekeeping (PG), which is a form of RG (Austin et al., 2013). PG involves restricting the other parent’s involvement or criticizing the other parent’s parenting skills due to concern about possible harm to the child. Reasons for PG include a history of intimate partner violence (IPV), harsh parenting, substance use, or a psychological disorder; these claims clearly require evidence.

Austin (2018) developed a justification analysis protocol for PG to assess whether the restrictive parent’s “gateclosing” behaviors were justified; he noted the importance of identifying the specific sources of potential harm and implementing protective measures. Based on an evaluator’s investigation, PG may be assessed as either unjustified restrictive gatekeeping (URG) or justified restrictive gatekeeping (JRG). URG refers to cases in which there is insufficient evidence to support restricting the other parent, and JRG refers to cases in which there is cause to restrict the other parent’s access (Austin, 2018). The 2013 bench book indicates that access may be limited in several ways when JRG is present, including supervising telephone calls or visitation (Austin, Fieldstone, & Pruett, 2013). It also notes that considering whether or not restrictive gatekeeping is justified is “essential” and “central” in cases involving abuse, relocation, or alleged alienation. The bench book provides a table to illustrate the safety issues that are the primary way to distinguish JRG from URG (p. 6): 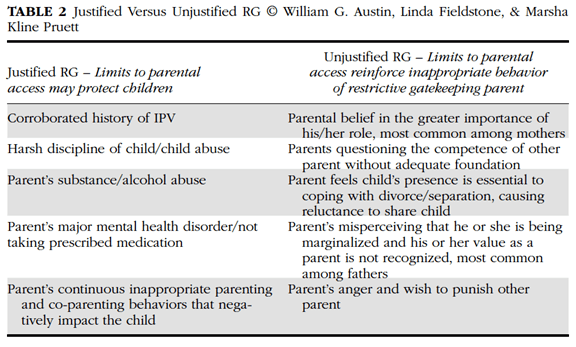 Overall, researchers suggest that describing “parental alienating behaviors” (PABs) is preferable to using the broad, loosely defined concept of parental alienation.  The concept of gatekeeping may also be clearer and more relevant than alienation.  Gatekeeping is believed to occur on a continuum that varies in degree (low, medium, and high), in quality (how facilitative or restrictive a parent is), and across specific behavioral domains (such as information sharing, communication, or appreciation of the other parent).  Gatekeeping has been divided into two primary patterns, facilitative or restrictive, and restrictive gatekeeping can be considered either justified or unjustified.  Other researchers suggest using the terms of adaptive or maladaptive gatekeeping to emphasize that the safety and well being of the child may be protected by either facilitative or restrictive parental behaviors, depending on the situation.

The second article in this series will describe some of the major issues and controversies surrounding alienation.

Want to talk to someone about this?

I conduct forensic and psychological evaluations for KKJ, and I have two overarching goals in this work. First, I strive for accuracy, honesty, and fairness in all evaluations. Second, it is important to me to demonstrate respect and appreciation for differences between individuals and groups.